Posted by EmandaJ at 5:21 PM No comments:

In recent days we have seen an eruption of feelings in the aftermath of the mass shooting in Southern California.  #YesAllWomen has got me to thinking on the events I have experienced and advice I have received in my 50-something years.

When I was a pre-teen, there was a serial rapist/murderer roaming the country (Ted Bundy).  So my parents, in an attempt to keep me safe, told me many times to always be observant of my surroundings, don't talk to strangers, travel in groups, etc. and other excellent advice for anyone!  When I was about 12 I was walking to a friend's house across an open field and was approached by a man I did not know.  I was frightened and ran like hell to my friend's house.  A couple of years later, I was propositioned by a young man from a visiting church group.  He was definitely older and stronger than me, and again I was frightened but was able to get away.

In high school, I was groped by a fellow musician in the band hall instrument storage room and I had done NOTHING to provoke this.  In fact I had done nothing to provoke any of these incidents.  A couple of the guys from band said they would take me and my gal friend home after the ball game.  When the driver, a so called friend, started going off in a totally different direction, I panicked.  I was sure he and the other guy were going to rape us.  He said he was just "teasing us".

In later years I received cat calls and whistles which I found very unsettling, but I was told to accept as compliments.  I dealt with my share of unwanted advances, but as a very shy person at the time, I was less likely to find myself in compromising situations.  As I matured and developed my sense of independence, I worked my way through good and bad relationships and tried to learn from the bad ones what to look for and work toward in the good ones.

Today, I work in an environment with young adults.  I see and hear what they say and do.  The misogyny and bigotry and the sense of entitlement they seem to espouse as normal I find truly frightening.  What I am trying to say is that my experiences are not unusual.  #YesAllWomen have had similar experiences.  This has to change!
Posted by EmandaJ at 12:44 AM 1 comment:

The Blue Danube Waltz as Inspiration


Erin Prais-Hintz’ Challenge of Music blog hop comes at an interesting time.  I just found out that I am losing my hearing.  I have genetic hearing loss, especially in my left ear, just like my dad and his brothers and sisters.  It sucks!  I was a Music Major for a time in college; music has been in my life from my very earliest memories.  I sang in the choir, I played in the band.

Music was on the stereo all the time while I was growing up.

I loved listening to my mom’s favorite records.  One of the pieces my mother would dance to around the living room was Johann Strauss’ Blue Danube Waltz.  Every time I heard it, my heart would leap, my spirit would soar.  That is the piece of music I chose as my inspiration for this challenge. 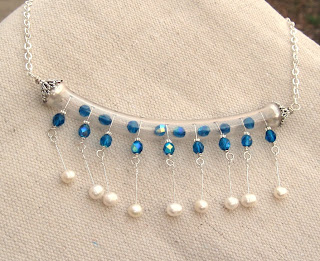 The clear plastic tubing is filled with the same Czech glass beads that are wire-wrapped beneath. 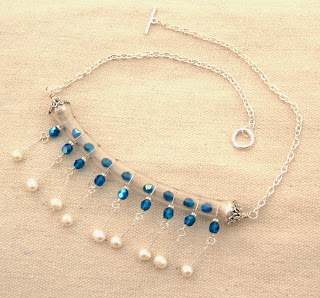 The loops suspend silver wires with fresh-water pearls.  The tube sits on the collar-bone and the beads and pearls move in synch like dancers around the ballroom. 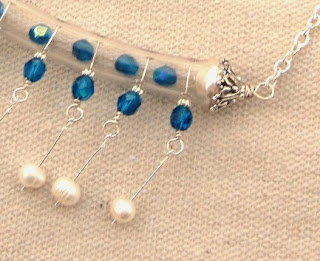 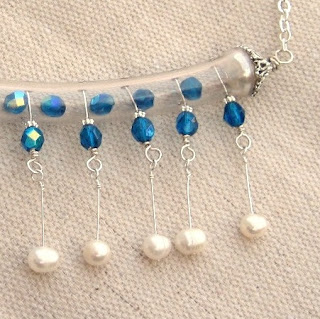 Go to Miss Erin’s blog and check out the other participants.
Posted by EmandaJ at 10:38 PM 20 comments:

Wind Beneath My Wings Treasury 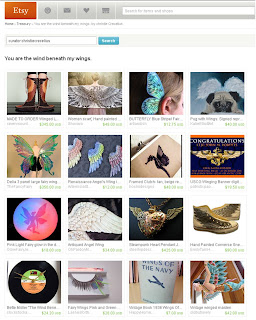 My Renaissance Angel Wings have been included in a Treasury this week, and because my laptop and wifi  haven't been on speaking terms for a while, I didn't even know it.  What a lovely Treasury!  Thank you, Christie Crecelius

Also I have been making some pretty little earrings and offering them for sale at coffee hour after church.  No big news there, but these earrings are donation earrings, with a minimum donation of $10, all proceeds go to the church!  They've made about $300 since just before Christmas.

I just signed up to participate in Erin Prais-Hintz Challenge of Music.  She's the hostess with the mostest and I always enjoy her inspiring challenges.  Go sign up too.  It's limited to 80 participants!
Posted by EmandaJ at 6:07 PM 1 comment:

Thanks to all of you who visited my blog during this past weekend.  Participating in Erin's Color Challenge was such fun -- a challenge and a true pleasure.  Visiting other blogs was a real treat too.  The color palettes from the US Geological Survey Earth As Art are breathtaking and the responses of the jewelry designers were amazing!  I am humbled to be among them.

Now, on to the winner of the Random Drawing for a hand-made Christmas ornament.  This is what I will be sending to my winner: 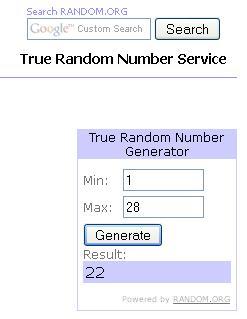 So, Kayla, send me your snail mail address (I've sent you an email) and I will be sending you a little giftie in time for Christmas.
Posted by EmandaJ at 10:53 PM 2 comments:


Don’t you just love Erin Prais-Hintz’s Color Challenge Blog Hop ?  This challenge was a REAL challenge for me.  Not a challenge in the sense of difficulty, but the time crunch got to me.    I have been thinking about the beautiful color scheme Erin sent me from the US Geological Survey Earth as Art representing the Lake District of England.  I have been to the Lake District and have very fond memories and inspirations from my time there. 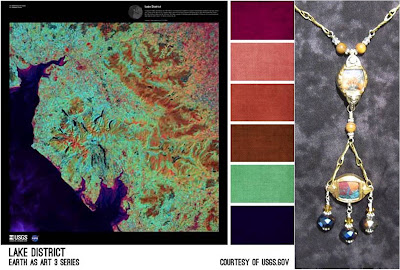 However, here’s what I pulled together to begin work on the challenge: 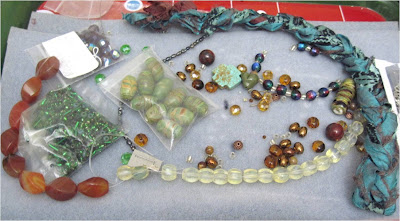 
As I was working on the necklace, though, I stumbled on a little project I had been working on a couple of weeks ago using vintage women’s watches.  The light bulb went off over my head!  Here’s what I designed.  It’s called Reliquary for a Fabri-holic. 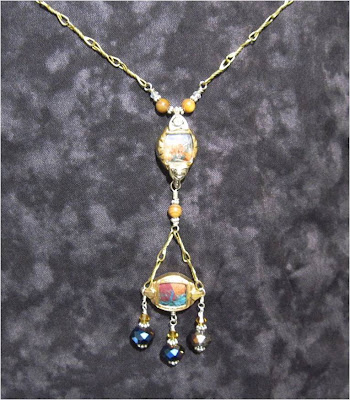 The watch cases contain tiny scraps of the beautiful sari silk in colors of the Lake District image.  It reminds me of a medieval crystal reliquary I saw several years ago that contained threads from the Virgin’s Tunic.  The necklace of twisted brass links hangs about 30 inches and looks very antique.


So, did I capture the scheme? (It was difficult to photograph)  Here’s a detail. Thanks to Erin for hosting the hop.  Now, go on over to Erin's blog and check out the other hoppers.

P.S.  I'm having a holiday sale in my Etsy Shop with the coupon code hohoho10percentOFF at checkout.
Posted by EmandaJ at 9:31 AM 29 comments:

Are You Ready for the Holidays?

Who’s ready for the Holidays?  Not me -- but I’m getting there.  Here’s some earring cards I designed for a craft show I did last year.  I love the little corner punches!  And the tiny hand is specifically for my earrings made with hand-made lamp-work beads. 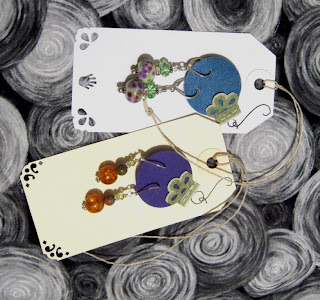 (Why does Google rotate my pictures when I have futzed with them to be just right??)
I spent several hours this week filling up my Etsy shop with all kinds of goodies and still have ideas for more.  I even have a coupon for the Holidays hohoho10percentOFF. 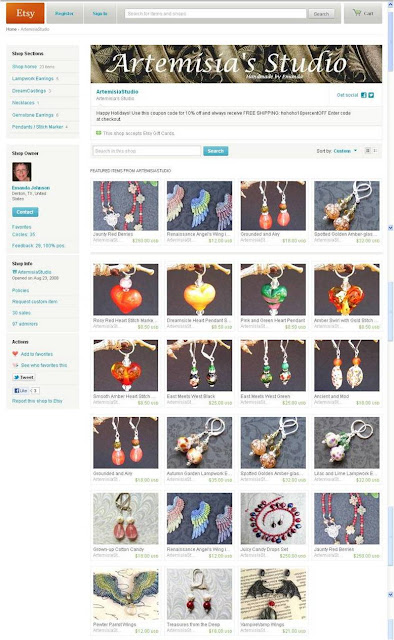 I am also working on Erin Prais-Hintz Color Challenge It's always and joy as well as a challenge to participate in Erin's doings.

My color palette from the US Geological Survey’s Earth as Art section is from England’s Lake District.  I have fond memories from our visit there a few years ago, plus I love the colors in the image.  We will see what I make – the design is still in my head. 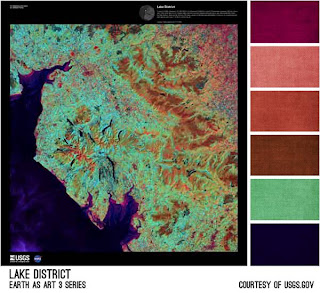 I have also designed and cast some pewter pendant that will be ready to sell soon. 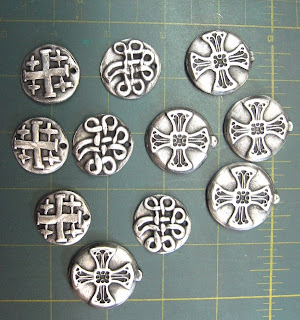 Again -- with the futzing!!

I’ve been making them up into pocket rosaries and really like the feel of them.
Happy Holidays!
Posted by EmandaJ at 12:00 PM 1 comment: 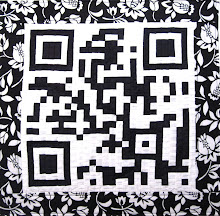